This game was created by my son, Dustin, so there is no doubt that the soccer game is original and safe to download.

Soccer Breakout is a fun "pong" type game especially suited for young kids or for the eternally young at heart.

I have asked for several enhancements to the game that will be forthcoming in the next few weeks. In the meanwhile, Dustin was anxious to "publish" and let people start playing his soccer game. If you have any suggestions for improvements, let him know

Version 2 of this free soccer game is now out and it's a major improvement! I helped Dustin make the background graphics and he spiced up some of the levels with bonuses and extra lives.

The latest version of Soccer Breakout can be found

The file is a stand alone executable file that has been zipped to minimize its size. 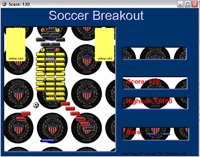 For a complete listing of free soccer games that I have found online, go to my Online Soccer Games Page.

Here are a few of my favorites.

Slime Soccer - Here is the free soccer game slime soccer. Slime soccer is HOT! Slime sports are a real fad right now for some reason. I must admit that it’s a lot of fun. Anyone in the family will have fun with this one. You can even play against each other.

The free online soccer game Goal Wall Shooting 3D is hosted on our website.  It is another flash-type shooting game in 3D with scoring based on time and shots made.

Power Soccer - Claiming to be the world's best online 3D soccer game,  I have to say the preview graphics are quite impressive.  Looks like it has a free mode or you can pay for more advanced features, similar to many mobile apps these days.

Mardi Gras SHOOTOUT Online Soccer Game – This game is just what it sounds like – a shootout. You get to alternate between taking the penalty kick and being the goalkeeper. Another good one.

For those of you looking for a phone soccer app or a cheap solution when buying a soccer game, don't forget to always check Amazon.com.  They have several free games for Android phones.  Here is a link for free Android soccer games at Amazon.  Soon I'll have a separate page for soccer apps for the iphone and Android devices.

Have your say about what you just read! Leave me a comment in the box below.
FacebookTwitterPinterestTumblrRedditWhatsAppMessenger
[?]Subscribe to Soccer-for-Parents

Soccer-for-Parents is excited to now offer our Simple Soccer Rules to parents "on the go". This is our own free android app (sorry ipeople) that installs in seconds and contains everything on our normal rules page along with a link to the official FIFA rules and USYSAA rules. Here is the free app!